This is a painting of the very last combat of WWII, which took place over Tokyo Bay on 15th August 1945.
Sub Lt Gerry Murphy shot down two Zeros "in turning combatwhich should have favoured the enemy", with "some fine deflection shooting". The quotation is taken from David Brown's excellent book, 'The Seafire'.
The painting shows Gerry Murphy's Seafire III in the Royal Navy's Pacific markings, where there is no red in the roundel, to reduce any possibility of our aircraft being confused with Japanese aircraft.
The Zero simply nosed over into a dive, with the cockpit canopy breaking up, so, in the interests of historical accuracy, I have resisted the temptation to add smoke and flames trailing the Zero.

The full story of the combat, and the background to it, has been written by Mark Huggins, and was published in the June 2001 issue of Aeroplane Monthly , pp51 to 55. A brief summary is given below (after the image, on this page).

The painting, entitled "Final Combat" is in oils on a 24"x36" canvas, and is now available as a Limited Edition Print (850 copies, worldwide), some signed and numbered by the artist, and some also countersigned by Gerry Murphy.

As a 'A piece of history', the print is a reminder that the RAF was not the only service involved in aerial combat.
Indeed, in this case, it was the Royal Navy that 'finished the job'.

Reginald J Mitchell's immortal Spitfire began its combat life against Bf 109s, defending our way of life close to home, and finished its WWII existence donning sealegs and taking the fight to Jiro Horikoshi's fabled 'Zero' on its home territory on the other side of the world.

This print celebrates these two outstanding examples of inspired aircraft design, and is dedicated to all those who fought in WWII in the Royal Navy Fleet Air Arm. 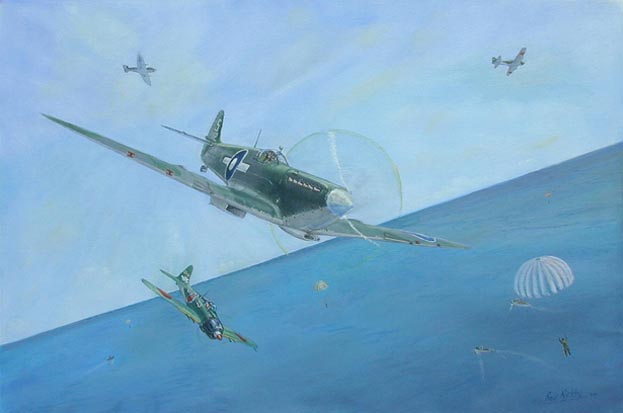 On 15th August, 1945, 3 Seafire IIIs of 887 Squadron, flying from HMS Indefatigable, were providing top cover for Avengers and Fireflies flying at 1000ft, and set on making attacks in the Tokyo area.
Four Seafires from 894 Squadron, flying 1000ft above the attack aircraft, provided close escort, and the three Seafires from 887 Squadron gave top cover 3000ft above the close support Seafires.
A dozen A6M5c Zeroes from the 302nd Kokutai, based at Atsugi, attacked, and, in the ensuing battle, which took place over Tokyo Bay, the leader of the top cover trio, Sub Lt Victor Lowden, hit five, destroying two, and was credited with a third, shared with Sub Lt W J Williams.

The third Seafire F III pilot, Sub Lt Gerry Murphy, shot down two Zeroes in turning combat, which, to quote David Brown's fine book, 'The Seafire', "should have favoured the enemy", but "ended with them both being shot down by some fine deflection shooting."

Jiro Horikoshi's immortal Zero was noted for its manoeuvrability, but, in this encounter at least, was out-turned by Gerry Murphy's Seafire III, the carrier-borne version of Reginal J Mitchell's Spitfire.

Although take-off, and, especially, landing on a heaving deck, was tricky, to say the least, once in its element, the Seafire was a formidable interceptor.
Indeed, I have in front of me a photocopy from an aircraft publication (I'm afraid it has no identification apparent), with the page heading "Far and away the best interceptor", in which an Admiral wrote a scathing report comparing a proposed new model Seafire with contemporaryAmerican naval fighters. The article then says "The DAW&FT (sorry, I don't know what this stands for..RJK) swiftly replied saying "Neither the Corsair nor Hellcat can look at the Spitfire MkIX or XII. It has been decided to produce a naval version of the XII and when we get this, or a modified MkIX, we shall have far and away the best interceptor in the world, greatly in advance of anything the Americans have now, or, as far as we can see, even projected.""

The skill required by Seafire pilots will well be appreciated by anyone who has watched films showing various Grumman fighters, with their long stroke undercarriages, making the familiar 'controlled crash' onto their carriers.
Not only did the Seafire pilot have to contend with the relatively fragile narrow-track short-stroke undercarriage of the Seafire, but they were denied the relatively good view from the Grumman fighters' cockpits, having to make do with a forward view consisting entirely of the cowling of the Rolls-Royce Merlin engine!

When this painting project commenced, I spoke to Victor Lowden, who passed me on to Gerry Murphy, who, to quote Victor Lowden, "lives a bit closer to you than I do!" (Surrey vs Dundee), and it was hoped that both Victor Lowden and Gerry Murphy would be able to countersign the prints.
Sadly, Victor Lowden died before the painting was finished, but I remember with fondness the conversation I had with him, and especially remember his enthusiasm for the project. He sounded as bright as a button, and I was shocked to learn that he had died, when I 'phoned only a few months later to check on some details of the encounter.

Gerry Murphy, with patience and good humour, painstakingly went through his memories of the battle, and I have tried, with the help of colleagues at Duxford, Jerry Shore at Yeovilton, the restoration team at Earl's Colne (at that time restoring a Seafire III), and all manner of contacts, including input from a Japanese Naval pilot, to make this painting as accurate as possible.
Especial thanks are due to Mark Huggins, who suggested likely markings for the Zero in the picture, and subsequently wrote an article for Aeroplane Monthly (published in the June 2001 issue).

Most thanks are, of course, due to Gerry Murphy, who is a remarkably lively, likeable and modest man.
When I remarked that, downing Zeroes in turning combat was pretty impressive, his modest response was that the Japanese pilots were "probably young and inexperienced". Only later, with Mark Huggins' help, did we learn that he was up against the 302nd Kokutai, one of Japan's crack naval squadrons, charged with the defence of Tokyo!

Although trials of earlier marks of Seafire against earlier marks of Zero had confirmed the Zero's manoeuvrability advantage, later marks of Zero had put on a bit of weight, to help counter the threat from US Navy aircraft, and the Seafire had added rather more power in the meantime, so the balance of manoeuvrability had perhaps swung the other way.
We may never know for sure, but it is nice to know that the Royal Navy was in the thick of the battle right up to the end.

Last thought!! I know this was the last air combat of WWII, but I wonder if it might also be the last air to air combat (as distinct from reconnaissance or ground attack missions) flown by a 'Spitfire'. If anyone knows of a later air to air Spitfire or Seafire engagement, I'd like to hear from you. (tel Cambridge (01223) 29 22 66).