The Miles M-52 Research Aircraft was a truly stupendous piece of design.

In 1943, the Ministry of Aviation asked Miles Aircraft of Reading to design a research 'plane to a simple but very far-sighted specification.
The 'plane should be able to fly at 1000mph after diving from altitude to reach this speed.
Some say this was just a sop to Miles aircraft, to make up for them not being given another more substantial contract, but intelligence reports had convinced the authorities that the Germans were working on a research aircraft with this kind of performance, and the choice of Miles to do the work had a lot to recommend it. For a start, they had always produced aircraft that were 'a bit different' from the norm, and quickly, too! Also, they were just down the road from the boffins at the Royal Aircraft Establishment at Farnborough, and they knew more about supersonics (at least, so it was believed) than anyone else in Britain.

So the M-52 was designed, in 1943, remember, with the following astonishingly far-sighted features:
1 An All-Flying Tail, to maintain pitch control through and beyond the transonic region.
2 A true Supersonic Bi-Convex Wing Section, with sharp leading edges, and very thin (for 1943) wings (I think 8% thickness/chord ratio at the root and 4% at the tip).
3 Wing tips shaped to ensure that the nose shock cone did not cut across the ailerons and disturb roll control.
4 A jettisonable nose section, to aid pilot escape in the event of an emergency.
5 A Whittle designed jet engine with Reheat and an Aft Fan (this is in 1943, remember!).
Nowadays, no fighter would be seen without a reheated fan jet engine, but in 1943, Whittle had foreseen the need for greater mass flow and higher exhaust speeds without melting the turbines, and had designed an engine to achieve these goals. I have seen films of the engine undergoing testing, with very messy flames shooting out of the tailpipe, so it was certainly nearing flight readiness on schedule, and was no mere theoretical exercise.
At high speeds, the engine airflow was able to bypass the turbine stages, becoming part turbojet, part ram jet, in much the same way as, many years later, the SR-71 engine achieved its high speed thrust.
I am constantly amazed at Whittle's far-sightedness, and, although he might be criticised for staying with a centrifugal compressor, the Grumman Cougar and a development of the Lavochkin La-17 both flew supersonically with essentially Whittle centrifugal compressor engines, so such an arrangement was no fundamental hindrance to supersonic flight.

The tragedy of the M-52 was that it was cancelled, without warning, in early 1946, when construction was under way, with orders to break up the jigs and send all the design data to Bell Aircraft in the US. Since the 'plane would have been flying by the summer of 1946, and since later knowledge confirms that it would almost certainly have achieved its specified performance, I personally find it hard not to believe the British were 'Leaned on', to cancel the M-52, so that the US would be able to be the first 'through the barrier', which, indeed, they were in October 1947, thereby gaining not only the kudos of being the first through the barrier, but also gaining first hand knowledge of the aerodynamics of transonic and supersonic flight.*

Certainly, this hypothesis seems far more likely than the 'official line', that we 'could not risk mens' lives' in this venture, as we had already been risking them in high speed dives in Spitfires for a considerable time, and the M-52 at least had a jettisonable nose escape capsule, whereas the Bell X-1 simply had a 'side door', out of which Yeager would have had to jump in an emergency, risking being sliced in twain by the wing.
The other later-rumoured explanation for the cancellation was said to be the discovery of German research showing the advantages of swept wings in delaying compressibility effects, but, of course, the drag coefficient of a straight wing actually drops below that of a swept wing once the transonic region has been passed, and Miles certainly knew this already, since the theory of wing sweep in delaying the onset of compressibility effects, was already known.
Ackeret's work on the subject had been explained by Taylor in a publicly available document published in 1932, and Dennis Bancroft, Miles' chief aerodynamicist on the project, was well aware of this work.
The RAE certainly should have known of this work too, although it is not certain that the RAE representatives on the 'Supersonic Committee'  were actually aware of the work!
The design goal of the M-52 was 1000mph at altitude, and so, being well and truly supersonic, Miles' decision to use a thin straight wing was considered preferable to a swept wing if this design goal was to be met, and it enabled the 'plane to be built without involving still more unknowns with swept wings (which, incidentally, were considered by Miles Aircraft at the design stage, and rejected for totally sound reasons).
However, when the Supersonic Committee were discussing cancelling the M-52 project, no-one appears to have gone back to Miles to ask why they were not using swept wings, and, indeed, Miles' aerodynamicists were not even aware that there was a Supersonic Committee!

Chuck Yeager has put on record that the most useful contribution the Bell X-1 made was in establishing the need for a 'Flying Tail' in order to maintain pitch control at transonic speeds.
Well, the 1943 Specification for the M-52 called specifically for a 'Flying Tail', which Miles Aircraft had already incorporated in the design, and had handed on a plate to Bell Aircraft, who, 'In case the Limeys were right', had duly beefed up their tailplane incidence trim system in case it turned out to be needed for pitch control in transonic flight conditions, which, indeed, proved to be the case!.

The M-52 saga is a tragedy of immense significance, and cost Britain the lead in practical first hand supersonic experience.

The two paintings are 'what might have been' paintings.

One of them shows the M-52 testing in a simple cloudscape, and the other shows the 'plane beginning its descent from altitude into what would have been 'The History Books', where the diminutive research 'plane might have been accompanied by two chase 'planes capable of following it to altitude, namely the beautiful, but deadly (all three prototypes crashed, killing their pilots) DeHavilland 108 'Swallow', and the Nene powered Vampire, with its distinctive 'elephant ear' additional air intakes. (The latter painting is available as a very Limited Edition Print (50 copies) See below).

The pilot selected for the M-52 was Eric 'Winkle' Brown,  who fitted the bill as an outstanding pilot who was also 'compact'!

* Since writing this, I have become aware of another possible reason for the cancellation.

America was very wary of the Labour Government  that was elected after the Second World War, perceiving it as having 'communist tendencies'.

The possibility that the M-52 might gather vital transonic information which might then be shared with Communist Russia would have set alarm bells ringing loudly in the US, and would certainly have prompted them to press for the cancellation of the M-52. No evidence of such can be found, but that is hardly surprising, given the sensitivity of the situation. As Britain was in massive debt to the US for purchases made under 'Lease Lend' agreements, we would have been in a poor position to resist US pressure.

Britain's subsequent unbelievably naive action of sending examples of its latest jet engine, the Rolls Royce Nene, to Russia, gives credence to the view that we might have been naive enough to give away valuable research data too, although, in fairness to Britain, the expectation was that Russia would sign licensing agreements to manufacture the Nene under licence from Rolls Royce.

Instead, of course, the Russians simply copied the engine and used it with great success in the Mig 15 fighter, which had a higher rate of climb and a higher ceiling, than the US Sabre. (Fortunately for the Allies, the Sabre actually shot down Mig 15s in the ratio 9:1, but it is believed that this was more a reflection of superior US piloting than of the relative merits of the aircraft flown by both sides).

A further possible reason for the cancellation was that the DeHavilland DH 108 Swallow was already on the drawing board, and the RAE, perhaps besotted by the German data which became available after the war, might have believed that sweepback could delay the onset of all compressibilty effects, including, perhaps, loss of control effectiveness at transonic speeds. Thus the tailless and highly swept DH 108 might have seemed a better bet than proceeding with the M-52, and, significantly, it was cheaper and quicker to build.

If this was one of the reasons for the M-52's cancellation, it is doubly sad, because the DH 108 lost pitch control in the very transonic region it was meant to explore, and John Derry's subsequent flight beyond Mach 1 was in a dive which went beyond the vertical, and completely out of control. Control was only regained after descent into the thicker and warmer air brought the Mach number back to values at which control could gradually be regained, and John Derry lived to tell the tale.

The loss of control in pitch would have come as no surprise to anyone who had studied the high speed behaviour of th tailless Me 163 rocket  prpelled fighter, which was renowned for its 'Graveyard Dive'.

Sweepback delays the onset of the drag rise as you approach Mach 1, but it does not delay the loss of control , and, indeed, those who flew the Avro Vulcan also had to be wary of dive angles increasing to the point where the dive would have steepened inexorably.

The rocket model tests of the M-52 configuration, carried out subsequent to the cancellation of the full size prototype, confirmed the transonic and supersonic stability of the design, which reached (when ignition of the rocket motor was finally tamed) Mach 1.38 before disappearing out over the Atlantic. Instrumentation also showed that Miles' drag estimates were, in fact, overestimates, vindicating the soundness of the design, which would almost certainly have met its secified design goals.

What a tragic false economy was the cancellation of the M-52 project, especially as the rocket model programme ended up by costing far more than continuing with the M-52 itself, and garnered very little useful information, too late! 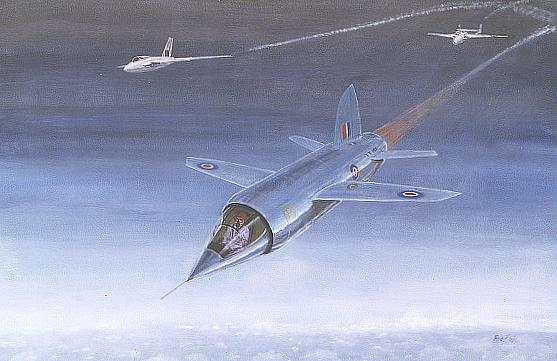 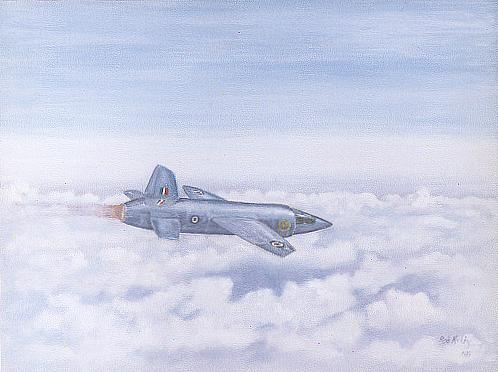 The top picture, entitled, "For Yeager, read Brown", is a 'what might have been' painting, and is now available as a very limited edition print of only 50 copies (if I had been smarter, I'd have made it 52!), produced by the Giclee process, and priced at £65 (plus p&p) for a 24"x20" print, with an image size of 22"x14.5" for artist signed and numbered prints, and £125 for a few prints also countersigned by Eric 'Winkle' Brown.